Transformative Artwork by Formerly Incarcerated Women and Their Children
January 12, 2017 by Emma Drew 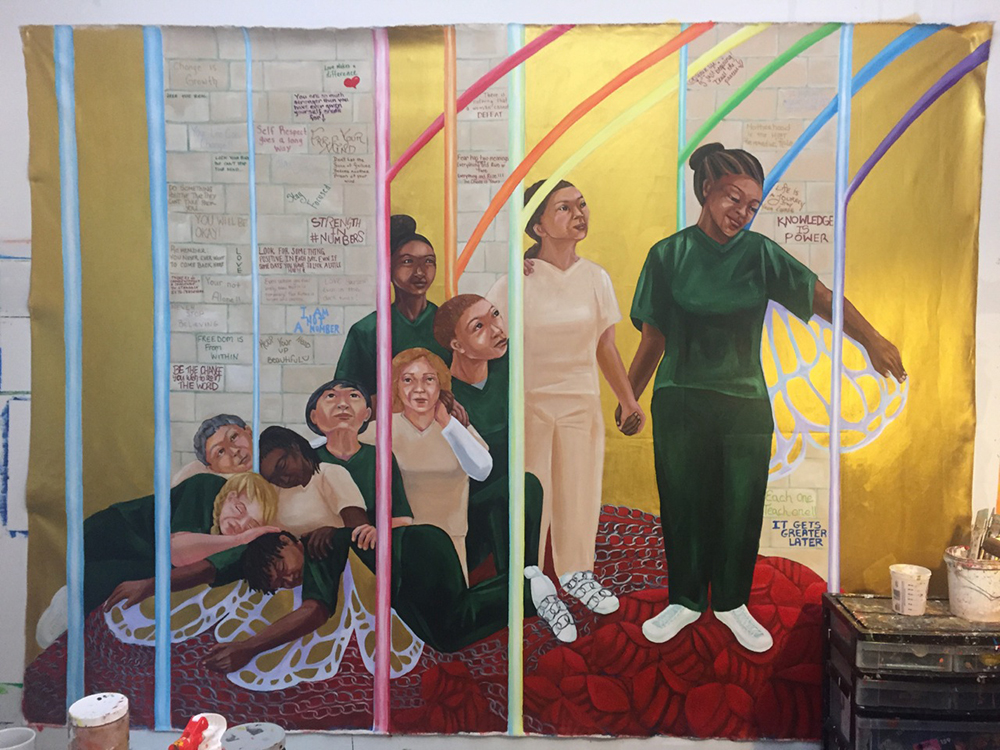 This weekend marks a moment of achievement for those working towards social justice for incarcerated women and their families, including muralist and SVA faculty member Katie Yamasaki (MFA 2003 Illustration as Visual Essay). Hosted by the Women & Justice Project (WJP), Transformation from the Inside Out is an event to honor the leadership of women directly impacted by incarceration and takes place this Saturday, January 14, from noon to 4:30pm at the former Bayview prison (550 West 20th Street on 11th Avenue) in Chelsea.

It will also serve as a celebration of the transformation of the space into The Women’s Building, a new hub of activism and engagement. Yamasaki, who started painting murals in 2003 and has painted around 80 all over the world by her count, was invited by WJP to partner on the creation of a piece for this space; the result, a collaboration with formerly incarcerated women and their children, will also be unveiled at the event. Yamasaki has done other projects with incarcerated adolescents in New York and Philadelphia, as well as with incarcerated women in Mexican prisons; I spoke with her about her work for the upcoming occasion. 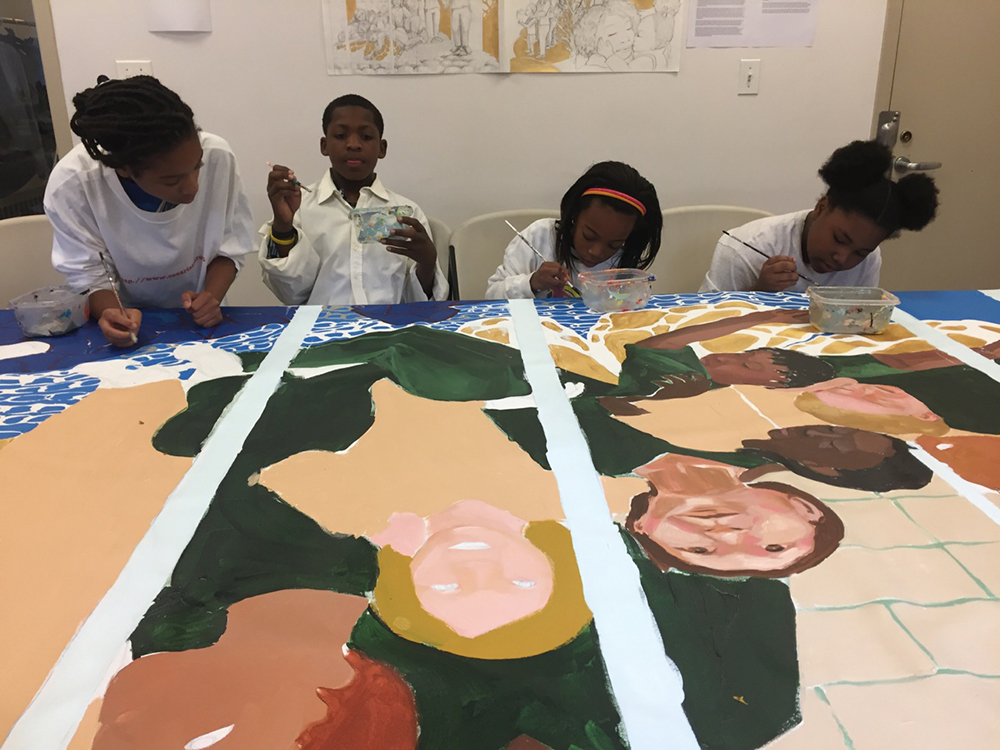 How did you become involved with Transformation from the Inside Out and the Women & Justice Project?

A few years ago, I did a project working with incarcerated mothers at Riker's Island and their children in East Harlem and Brooklyn. I conducted a long series of workshops inside Riker’s women’s jail, where mothers designed a mural for their children. The children went on to paint that mural in East Harlem. I also conducted a parallel series of workshops with the kids, who designed a mural for their moms. The mothers and I painted that mural inside the women’s jail.

Through the course of the project, I became well acquainted with the incredible community of people devoted to working with incarcerated women and the families impacted by their incarceration. When the WJP was ready to do the "Transformation" project, I was happy they thought of me.

I would love to hear more about piece you worked on for this, what it looks like, and any specific sources of inspiration or influence.

WJP knew they wanted a mural that would represent the concept of “transformation from the inside out,” both in terms of personal transformation and symbolic of the physical transformation of the Bayview Women’s Prison into the Women’s Building, where the mural will eventually be housed.

The left panel [of the mural] shows group of women, gathered and huddled around a fallen women. They are comforting, embracing, supporting, grieving, thinking and looking forward. The fallen woman represents Sandra Bland, as requested by many women in the workshops. This panel is intended to show the depth of hardship that the women have experienced, while depicting how the bonds created on the inside not only helped to make them more resilient, but also helped better prepare them for life on the outside.

The right panel shows the continued transformation after the period of incarceration. In the foreground, a large, loving image of mother and child shows one of the primary motivations many women expressed in maintaining their focus and improving their lives. Behind them to the right, a group from the community finishes painting the rainbow that started its arc in the prison, in the left panel. The idea is that the community, including the Women's Building as a resource, is there to best support the woman in her transformation in any way possible. 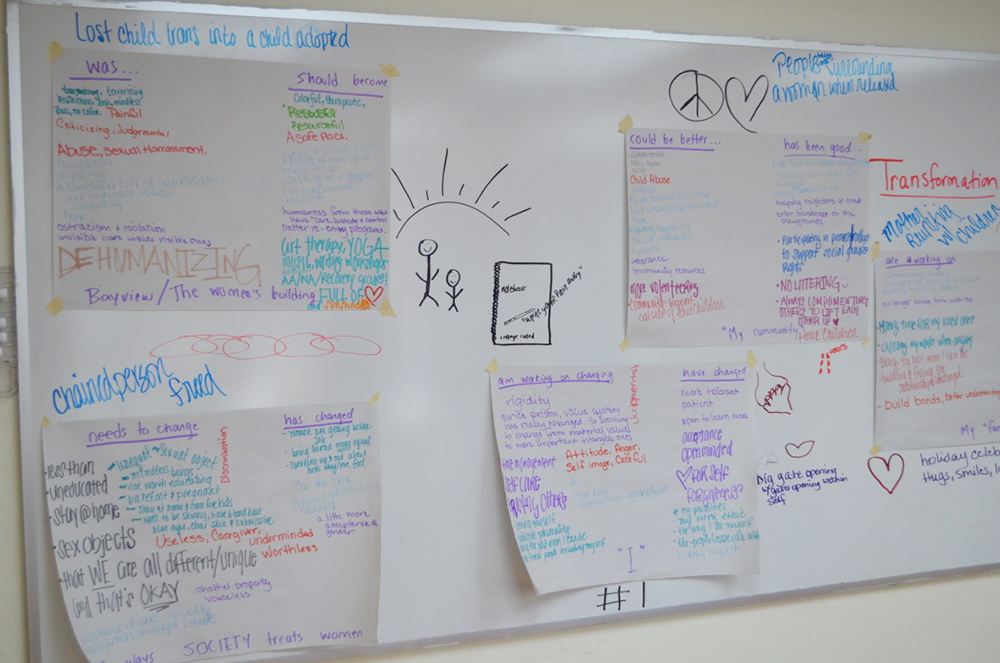 Who were you working with on the mural and what was the process like?

For this project, I partnered with the organization, Hour Children in Long Island City. WJP works closely with Hour Children and they run incredible programs for women returning to society from prison in areas including [help with] housing, rehabilitation, job skills, education, parenting, therapy, etc. Because the atmosphere there is already so safe, the women have a certain amount of confidence with one another and were very open with me from the beginning. I hosted a series of workshops with the moms and their kids to develop the theme, symbolism and imagery—the most important part of the workshop process is getting to know the community so the mural truly represents them. We are telling the story of their journey (not mine), so the workshops are a space to get the women sharing and thinking visually and verbally about their own stories and transformations.

After the workshops, I take all of their writings, drawings and notes from extensive discussions and make it into a mural design. I later report back to the group with the mural design for feedback; this is when they can suggest changes, and let me know what is and isn’t working in the design. They are the art directors in this process, because the image is theirs alone. After the design is approved, I sketch it up onto (in this case) large canvas panels and then we painted it together. All participants earned a stipend for working on the mural and participating in the workshops. 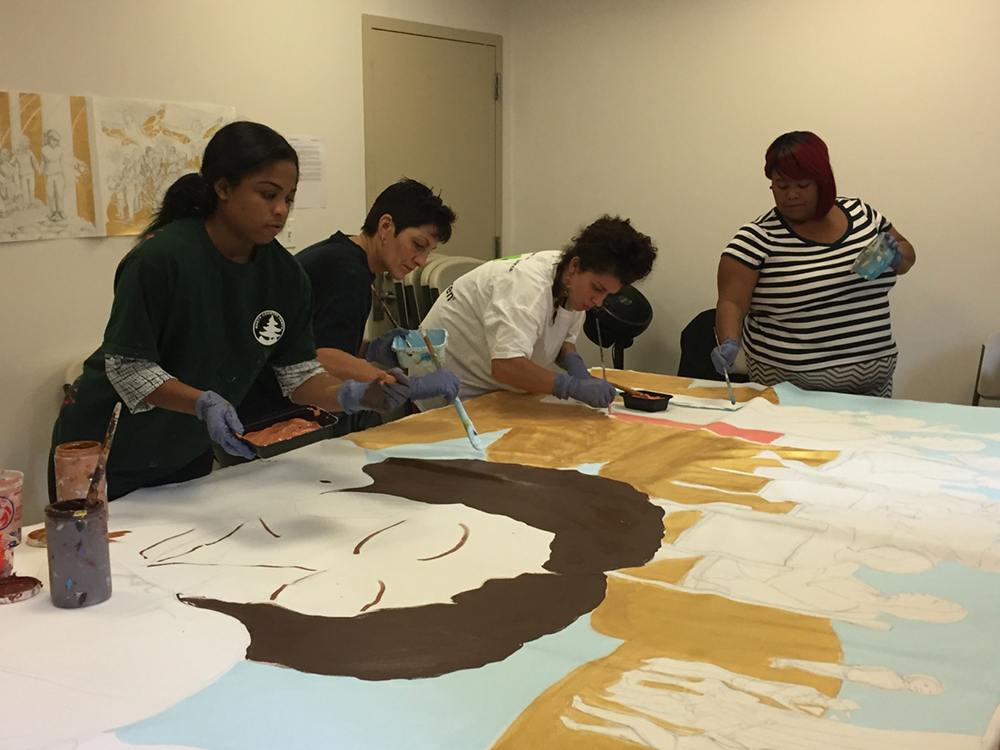 How do you see your various practices—muralist, children’s book author and illustrator, and teacher—as informing one another?

I think all of my practices are related because they are all about storytelling. It’s always about telling stories that often go untold. The mural or the book is just the vehicle and both provide wonderful, democratic platforms for large audiences to experience these stories.

Teaching is just kind of working together towards a shared (or individual) creative goal—helping people tell their story in the most effective way. Honestly, my role teaching in a fourth grade classroom or in a program room inside a max security prison isn’t as different as you might think. I just kind of set things up and create a relaxed environment, try to provide a few new techniques, and then get out of the way.

For more information about Transformation from the Inside Out and to RSVP, click here.